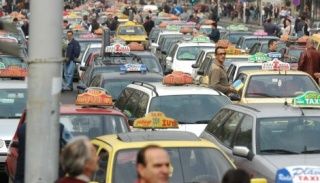 Somebody once said that you can recognize taxi drivers anywhere in the world - they're the people who never seem to have change. Relationships between passengers and taxi drivers is much a love-hate relationship anywhere you go in the world, and Belgrade is no different.

Having Belgrade's recent history in mind, TAXI in Belgrade has been a hot potato for many city authorities. During the nineties and the economic transition of the country TAXI transport has been a source of income for many people coming from all walks of life. Unfortunately, this has also brought about a very bad reputation for almost all taxi drivers - they became synonymous for murky business and swindle of ignorant newcomers.

Fortunately, things have changed drastically but there are still a few remnants of the period. As long as you stick to common sense or the two ground rules that we will put here you are likely to be carefree.

2. Avoid the taxis bearing the big white logo on the roof.  They look legit, and they are legit, but are almost certain to charge you an arm and a leg. It's the association of independent taxi drivers and they are lurking in teh alleyways around the Man Bus Staition and MAin RAilrad Station as well as the airport. So beware.

Now that you have been advised, you will find ou that taxi transport is actually very regulated. For more info on current pricelist click here, and for more advice on dealing with the drivers check out ihatetaxis.com